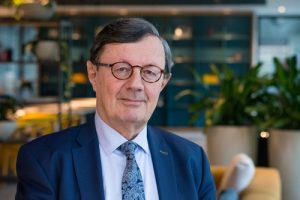 There is a ring binder on the table that contains twenty-five detailed memorandums. The board of the Holocaust Foundation for Individual Insurance Claims Sjoa (SIVS) is meeting today to take a decision about these twenty-five memorandums. “Each memorandum represents a claim and tells the sad history of a Jewish family”, Numann explains.

He randomly picks up a memorandum as an example. The first page shows who the policyholder is. The list of names hurts. “These are hurtful stories and, unfortunately, many memorandums are alike”, Numann says. “Actually, each memorandum contains a small family history that is difficult to comprehend and that is confronting each time.” He points. “As is often the case, this memorandum contains the story of a whole family, including a four-month old baby, that was murdered in Auschwitz. There is so much tragedy behind it, that you must try to detach yourself from this as well as you possibly can.”

The board (which consists of Ernst Numann, secretary Tineke Splinter-van Kan and treasurer Hans van Veggel) meets five or six times per year and judges twenty to twenty-five memorandums per meeting. “We try to read and judge these memorandums with as much detachment as possible”, Numann emphasizes.
He has been involved with the Foundation right from the start, first as board member on behalf of the Central Jewish Board and then as chairman since 2006. He says he did not have to reflect for a long time when he was asked to become chairman. “I have accepted the chair because it is important that justice is done. The tragedy cannot be expressed in money. And let’s be fair. 8.5 million in 20 years is a not spectacularly large amount, but from the viewpoint of justice it is extremely valuable. In our daily practice, we notice that it is not always important if a payment is or is not made. The information is so welcome. For the heirs, it can also be quite satisfactory to know that the policy of grandpa and grandma was paid in 1954.”

As chairman, Numann leads the meeting, he is the contact person and ultimately responsible for SIVS. “In the first board meeting, twenty years ago, we decided that the general management and the bureau of SIVS would be responsible for the benefit payments. We as the board would only deal with rejections (nothing found, policy paid out in the past, applicant is no rightholder), but in practice it soon turned out that we took all the decisions in the board.”
The Scholten committee already concluded in its report that the vast majority of the robbed Jewish insurance assets had ultimately been restored and Numann confirms this now. “It is correct. Though we paid substantial amounts of over 100,000 euros, it is especially the immaterial significance of our work that is important. Justice is done after all.”

The applications that are submitted to the foundation can be divided into three categories. Firstly, applications that relate to a list of names that has been published on the internet since 2004. “These are relatively simple applications, which just have to be checked.”
The second category is already somewhat more difficult and consists of applications which contain some data, for instance, about a policy and/or insurer. Numann: “Someone may, for instance, still have a receipt for premium payment and believes to be almost certain that grandpa and/or grandma had concluded a policy with a certain insurance company.”
Finally, the third category relates to general requests for which there is no information available. “These last-mentioned applications require such an extensive search that we have decided that we will no longer process these applications after more than twenty years”, Numann says. “Practice has proved that these applications hardly ever result in a benefit payment, because, for instance, a payment was already made in the past or because simply no information can be found with any insurance company.”

Numann uses the words a few times: justice must be done. That is why he wants to illustrate one example from the 20-year history. “We always said that we did not wish to repeat the legal redress. That is even explicitly laid down in our articles of association. But, at a given moment there appeared to be one category that was very distressing.”
The vast majority of the robbed policies was still settled as a result of the post-war legal redress, but this only occurred if there was a factual inability to pay the premium.
Numann: “The policy was not restored if someone had no money (anymore) to pay the premium for reasons of, what was then called, economic inability. Take, for instance, a doctor who was only allowed to have Jewish patients and saw his practice decimated as a result. Afterwards, he also had to experience that his Jewish patients gradually disappeared, so that he just had no more money to pay his premiums. The Council for Legal Redress decided after the war that such a policy did not have to be restored as the policyholder had ‘chosen’ not to use his (substantially reduced) financial resources for premium payment. We were not authorized to deal with this policy as the judge had already decided on it, but such stories were so unfair in our opinion, that we have made a special arrangement – in consultation with the Association of Insurers and the Central Jewish Board – that leads to a fixed payment. In our view, these people were also entitled to legal redress.”