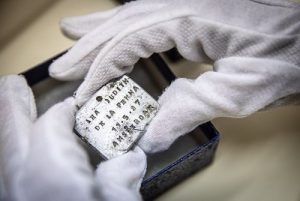 “Initially, I found it especially shocking that the life insurance policy of my grandpa and grandma was paid to me and my sister. It is bizarre to receive money from deceased family members. Perhaps they concluded this policy shortly before they died.”

The grandpa and grandma of Lea, Herman de la Penha and Esther de la Penha-Stibbe, are killed in Sobibor on 11 June 1943. Her father David, only child of Herman and Esther, has been smuggled away from the nursery and placed with a hiding family at a shipyard in the northern part of the country. David is over one year old when his parents are killed. He has to spend a substantial part of the war years in a closet. After the war, David leaves for Israel together with other foster parents and returns to the Netherlands when he is around 20 years old. David has two daughters (Esther and Lea) and dies in 2012.

“My father has always been preoccupied with the war. I also think thd contact with the Sjoa Foundation about the insurance policy of his parents. I was not actively involved with it myself and actually did not know that this application was being processed. After the death of my father, the foundation contacted my sister.”
Herman and Esther de la Penha-Stibbe
In the autumn of 2018, Lea receives her part of the insurance benefit. She calls it “totally unexpected” and actually she does not rwant to spend it on something ‘mundane’ such as groceries or a holiday. So, we put it in a savings account.”

When Lea and her sister attend a conference in 2012, she meets an Israeli and a Polish archeologist who have found the name plate of her second cousin and namesake, Lea Judith de la Penha, during excavations in Sobibor. “Immediately thereafter, the idea is conceived to visit Sobibor”, Lea says. “I already wanted to do that, but when I received the money in 2018 all the pieces of the puzzle fell into place: we must go to Poland as a family.”

Together with her husband, Menno Schokker, and two daughters (aged 20 and 22) Lea flies to Krakow early this year. “We have first visited Auschwitz and Birkenau and in sum, we found that ‘intense’.”
Her husband Menno, who is also present at the interview, adds that the cruelty comes down so hard that the confrontation is very painful. “We thought that we knew everything, but when you are there, you know nothing. It is very shocking and confronting to be in Auschwitz.” Lea: “We walked around there for about 3.5 hours and we were completely numb. All four of us.”

The day after the visit to Auschwitz is the birthday of one of the daughters, and so no camp is visited on that day. The following day the family goes to Sobibor. It is very heavy for Lea. “The visit was very emotional, as this is the place where my grandparents were killed. And it is also the place where the name plate of 6-year old Lea Judith was found, beside the car park of the museum. It is too  crazy for words, but in the place where a camp once was where people were gassed, cars are now parked and there is a small green area.”
She was able to see and hold the name plate of Lea Judith in Majdanek, but that was it. “The name plate remained there as it is Polish property. Perhaps, if I put in a lot of effort, I could gain possession of it, but then it will probably remain stored in a drawer here.”

Lea has asked for a copy and if all goes well that will be made. “Lea Judith was my father’s cousin. Her grandpa was my great-grandfather’s brother.  It was very emotional to hold her name plate. I cannot closer to my family than that.”
Menno: “On the other hand, there was also something sinister about it. In addition to the fact that here name was also Lea, her parents had perhaps made a name plate for her so that she would not get lost. In thoughts you see her mother put that name plate around her neck. And who removed it? Did she do it herself? Did her mother throw it away? You can imagine everything and at the same time nothing.”

Lea is pleased that they made the journey. “I am also glad that we did it in this way. Of course, we could have paid the trip from our own money, but it really adds something for me that it  came out of the insurance money.”
She says is not preoccupied with the war on a daily basis, but it has shaped her as a child. “The war had a profound effect on my father, but also on me. Al these ‘holes’ in the family, grandpas and grandmas who were not there. After my father passed away, I received boxes full of papers. Not all the items are from the war. It is the complete dossier that my father built up during his life, included much genealogy, letters from the war and his personal file. Both from the war years and the period immediately thereafter. I do not really know what to do with it. I do not want to throw it away, but I also do not want to pass it on to my children. I have to do something with it, but have not yet figured out what.”

The question arises. Does she want to add anything? “Yes”, she replies. Lea praises the work of the Sjoa foundation. “It is valuable work. I only deeply regret it that my father has not experienced the outcome. It would really have helped him.”