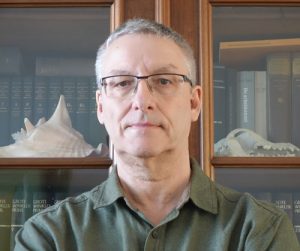 Van der Well has been involved in the Sjoa Foundation almost right from the start. Before that time, he had worked for the Stichting 1940-1945 (Foundation 1940-1945) for fourteen years.

One of his functions was coordinator of the Central Helpdesk Jewish War claims. Therefore, Van der Well knows all the ins and outs of war policies. He calls that a ‘big advantage’. “I now work for SIVS with three colleagues who have also been there for quite some time. It is rewarding work, but you must be able to set it aside. In the early years we had Jewish employees who ultimately could no longer cope with the work.”

What is your personal connection with the war?
“Not much until my student days. Until I attended a seminar about the resistance in Leyden. The assignment was to interview as many people as possible from the resistance in Leyden who are still alive. I was captured by the personal stories. They touched me. When somebody told me that the Foundation 1940-1945 was looking for a researcher, I did not hesitate for a moment. I applied, was hired and stayed for fourteen years.”

How did you end up with the Holocaust Foundation for Individual Insurance Claims Sjoa?

“There was commotion about the Jewish balances around 1998. The Central Jewish Board (CJO) was also established around that time, which wanted a helpdesk for claims. An appeal was made to the Foundation 1940-1945 and I was ultimately asked to co-ordinate that helpdesk. It received all sorts of claims, varying from paintings and bank balances to art and insurance policies. The Association of Insurers had started an investigation in the same period about insurance balances and the insurers made an agreement with the CJO at the end of 1999. One of the parts of that agreement was the creation of a foundation that was supposed to pay out policies that had not been paid after all. The insurance sector made twenty million euros available and I was asked to give shape to the foundation. I considered it a nice challenge.”

And? Did it become that?

“You can say that again. Before we knew it, we had received 3,000 claims, while we did not have procedures yet.”

Where do you begin?

“At the beginning. First, make an inventory of what has come in and then make priorities. We did that, among other things, based on the dates the claims were received, but we also gave priority to older people who had survived the war.”

Did you wish to work fast?

“No, we wanted to give priority to these people as we felt that they were most entitled to it. Speed has never been our priority. That was thoroughness. We did not want to pay out to the person who submitted the claims and then say: here is the money, sort it out yourself for your family. We wanted to pay out to all rightholders. That requires research, and, therefore, time.”

How long, on average, are you working on one claim?

“That is difficult to say. We often do research and handle applications simultaneously. Some applications only require one hour, while other take several days.”
Insurers are searching their archives to see if a policy has or has not been restored after the war. What can you add to this?
“We do our own research with, for instance, municipalities, the national archives and the tax authority to find out if a policy has already been restored. When we have gathered all the data, we write our report and the board makes a decision about the application concerned.”

You have access to archives which are closed to the public?

“That is correct. The archives of the tax authority are closed. We need to have permission from the surviving family members before we are allowed to search in these archives. And the national archives are so immeasurably large that you get lost there. Searching for Mr. Cohen from Amsterdam, for instance, is a mission impossible. Only in exceptional cases are we allowed to examine files on the spot and we are very grateful for this. In conclusion, we need the municipal archives for the address data.”

You sometime make complete pedigrees before you are able to pay a policy?

“Indeed, we do that. It even regularly happens that we do not pay out anything, but the people receive information about their family, which is very valuable. Most Jewish families kept silent after the war.”

Is the money of secondary importance?

“In most cases, it is. The benefit payments are sometimes very low, but we are able to give information that was not availiable before. Don’t forget that most Jewish families kept silent about the war. Moreover, many people emigrated to Israel or the United States after the war. They do not know anything about their family and they are very pleased to find that they still have relatives somewhere.”

Which claim has stuck with you the most?

“There are so many, but there is one case that I clearly recall. A man had gone into hiding as a child, separated from his parents. They had both been killed and he thought that he had lost his entire family during the war. We were able to put him in contact with an old relative who had known his parents. That was beautiful!”

What does the research do with you? All these lists, all these names. Can you let it go after work?

“That is a condition. I have done this research for a long time and I have had to learn that. When you constantly see names and ages of people who have been killed, you form images in your mind. When my children were born, I became extra sensitive to the children who were on lists. You must be able to set that aside. If people sometimes ask me after the weekend if I saw this movie about the war, I usually reply: no, I didn’t. No war for me during the weekends and in my spare time.”